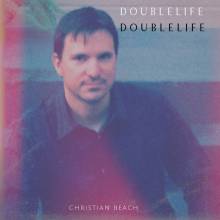 DoubleLife will be released digitally on Friday, April 10, via Beach’s Bandcamp page and distributed to streaming and download sites, such as iTunes, Amazon, Spotify and GooglePlay, through DistroKid. A sampling of the new EP can be found below.

“There is an Americana sound at the heart of DoubleLife,” says Beach, who wrote all six songs and played most of the instruments on the EP. “But there are lots of layers and I experimented with different sounds.

“From a production standpoint, it sounds like Americana meets Alan Parsons Project,” added Beach, who also produced DoubleLife. There are moments on the EP that will also remind listeners of Fleetwood Mac and ELO.

Despite the long gap between releases, Beach has continued to write and record new music over the years, with a few of those songs posted to his ReverbNation page. While Beach had targeted early 2020 for the release of DoubleLife a few months ago, he did not plan on releasing it during a time of such uncertainty.

“Music has always been my release—an escape,” said Beach. “I’m putting these songs out into the world so, hopefully, someone can listen to them and escape from the stress and anxiety of these times—if just for 24 minutes or so.”

Beach will be among the many performers taking part in BlowUpRadio.com’s “Stay the F*** Home Fest,” a virtual music festival to be streamed by the New Jersey-based online radio station Friday, April 3, through Sunday, April 5. The event will feature musicians performing 30-minute live sets recorded by the artists in the safety of their own homes during the current public health crisis. For more details and the schedule, please visit http://blowupradio.com.

The driving force behind 1990s-era industrial-edged bands Slave of Id and Artists That Kill, and the more straight-ahead rock band Ton of Bricks in the early 2000s, Beach branched out on his own in 2005 as a singer-songwriter inspired by American roots and folk music influenced by Bob Dylan, Hank Williams Sr., The Band, and more contemporary artists like Jeff Tweedy. Beach’s first solo album, 2009’s Christian Beach, was ranked by music journalist Gary Wien as one of the top 100 albums by New Jersey artists between 2001 and 2010, with lead track “Open Spaces” in the No. 77 slot among the top 100 songs by New Jersey artists in that same span.

DoubleLife was mastered by Alan Douches at West West Side Music.

All songs written, performed and produced by Christian Beach. Mandolin on “Desert Places” by Gorgo Beach. Mastered by Alan Douches at West West Side Music.